The Lenten Cross is displayed starting on the first Sunday of Lent.   Each Sunday it is changed to depict the journey of Jesus on the way to His Cross. 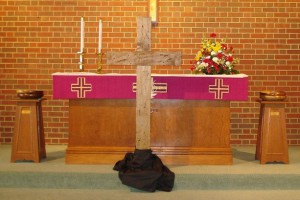 For the First Sunday, February 22nd,  the cross was barren so we could reflect upon the journey He took for us.

On the second Sunday, March 1st, we were reminded that Jesus was sold for thirty pieces of silver. 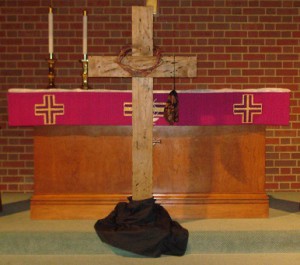 On the third Sunday, March 8th we remembered that the soldiers scorned Jesus and pushed a crown of thorns on His head. 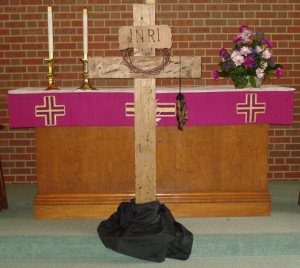 On the fourth Sunday, March 15th we added the sign “INRI”.  At the time of Christ’s death the letter “T” was used to stand for the letter “J” and the letter “R” stood for “Rex”, which meant “King”.  Thus the sign above Jesus’ head read “Jesus the Nazarene – King of the Jews”.  The Pharisees appealed to Pontius Pilate because they wanted it to read – “He said He was the King of the Jews.”  Pilate, who was feeling remorse over the crucifixion said, “It will remain as I have written.” 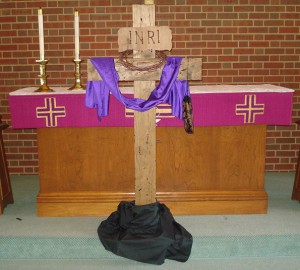 On the fifth Sunday, March 22nd we remembered that the soldiers clothed Jesus in a purple robe, struck Him in the face, and mocked Him saying, “Hail, king of the Jews.”  Later at the foot of the cross, they gambled for His garments. 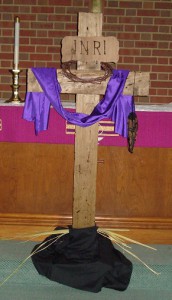