Once there was a three year old boy who went into the kitchen without his mother’s permission. He pushed a chair against the kitchen counter, climbed up, and began to eat some newly baked chocolate chip cookies.  The boy’s mother noticed it was too quiet, and she had begun to look for her son.  When she found him, he said, “I just climbed up to smell the cookies, but my teeth got caught in one of them.”

Last week we saw how 17 year old Joseph was sent by his father Jacob to check up on his brothers. They in turn saw this as an opportunity to forever rid themselves of their younger brother, who they absolutely hated and sold as a slave.

We pick up the story in Genesis 39:1-23
Now Joseph was taken down to Egypt, and Potiphar, an officer of Pharaoh, the captain of the guard, an Egyptian, bought him from the Ishmaelite’s who had brought him down there. 2 The Lord was with Joseph, and he became a successful man; he was in the house of his Egyptian master. 3 His master saw that the Lord was with him, and that the Lord caused all that he did to prosper in his hands. 4 So Joseph found favor in his sight and attended him; he made him overseer of his house and put him in charge of all that he had. 5 From the time that he made him overseer in his house and over all that he had, the Lord blessed the Egyptian’s house for Joseph’s sake; the blessing of the Lord was on all that he had, in house and field. 6 So he left all that he had in Joseph’s charge; and, with him there, he had no concern for anything but the food that he ate.
Now Joseph was handsome and good-looking. 7 And after a time his master’s wife cast her eyes on Joseph and said, “Lie with me.” 8 But he refused and said to his master’s wife, “Look, with me here, my master has no concern about anything in the house, and he has put everything that he has in my hand. 9 He is not greater in this house than I am, nor has he kept back anything from me except yourself, because you are his wife. How then could I do this great wickedness, and sin against God?” 10 And although she spoke to Joseph day after day, he would not consent to lie beside her or to be with her. 11 One day, however, when he went into the house to do his work, and while no one else was in the house, 12 she caught hold of his garment, saying, “Lie with me!” But he left his garment in her hand, and fled and ran outside. 13 When she saw that he had left his garment in her hand and had fled outside, 14 she called out to the members of her household and said to them, “See, my husband has brought among us a Hebrew to insult us! He came in to me to lie with me, and I cried out with a loud voice; 15 and when he heard me raise my voice and cry out, he left his garment beside me, and fled outside.” 16 Then she kept his garment by her until his master came home, 17 and she told him the same story, saying, “The Hebrew servant, whom you have brought among us, came in to me to insult me; 18 but as soon as I raised my voice and cried out, he left his garment beside me, and fled outside.”
19 When his master heard the words that his wife spoke to him, saying, “This is the way your servant treated me,” he became enraged. 20 And Joseph’s master took him and put him into the prison, the place where the king’s prisoners were confined; he remained there in prison. 21 But the Lord was with Joseph and showed him steadfast love; he gave him favor in the sight of the chief jailer. 22 The chief jailer committed to Joseph’s care all the prisoners who were in the prison, and whatever was done there, he was the one who did it. 23 The chief jailer paid no heed to anything that was in Joseph’s care, because the Lord was with him; and whatever he did, the Lord made it prosper.
This is the Word of God. Thanks be to God.

In this passage of scripture, Joseph found himself in a very difficult situation; Potiphar’s wife had her eyes on him. Joseph could have rationalized to himself, “When in Egypt, do as the Egyptians do.”  He could have figured, “I am alone in this country.  I am single.  I am just a slave.  I work for nothing.  Why not have some fun.”  But he didn’t.  Instead, it was the fear of God that kept him straight.

What is remarkable is that Joseph did not have the advantage of a Vacation Bible School or a Youth Group to keep him going. He had an inner conviction to honor God and do what was right, and that was the secret of his success.

When we commit our hearts to the Lord and live for him, we will be noticed. Jesus said just as much in Matthew 13:43 when he said, “That the righteous will shine like the sun.”  With Christ in our hearts, people around us will take notice.

Now this is just speculation: Mrs. Potiphar could have been a victim of an inattentive husband, perhaps due to his many duties as the chief bodyguard or executioner to Pharaoh.  Perhaps she had plenty of time on her hands to think about that young handsome slave, and since he lived in the house and was their property, she felt entitled to him.

I believe there are those who would make fun of Joseph and say that he missed a chance to indulge in some forbidden pleasure. Think of it like this.  God will allow us to make a decision to sin, but He won’t let us feel good about it afterwards.

There is one particular plant that fits into this story. It is called the Pitcher Plant and it is similar to the Venus Fly Trap.  The Pitcher plant uses a sneaky method to attract its prey.  Throughout the plant is a trail of sweet nectar, which is used to tempt the hungry insect.  The insect is lured into the mouth of the colorful trumpet by the scent of the sweet nectar.  Expecting a feast, the insect travels through the narrow slippery tube where it is finally soaked and drowned in a special nectar like liquid at the very end. 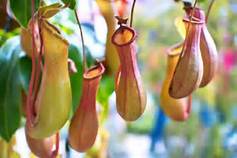 Forbidden pleasures look appealing, but if we were to get lured in like the Pitcher Plant, it can be difficult to get out.  In the end, it does have the potential to ruin lives.

Even though we live in a fallen world, we can control the books we read; we can determine which TV shows to watch; we have a choice in which movies to attend. It is up to us, what type of music we listen to, the places we go, the friends we choose, and the websites that we visit.

One Christian leader had a novel way he faced temptation: he would blink his eyes very rapidly. He did this to break up any sinful thoughts and that unusual act would serve as a distraction and draw away any unhealthy attention away from the temptation.

Let me give you 10 quotes on temptations.

To help us overcome temptation, it is important that we belong to some type of group to keep us strong. Our church also hosts the weekly NA meetings, where people discuss their battles with temptations.

It is the same thing with church. When we come, we receive spiritual strength through the prayers, the music, and the written and spoken word.  When we come to church, it has a cleansing effect on our minds and speech, and hopefully we will live right.

Let me close.  All of us have certain temptations that we struggle with.  If certain sins were not attractive, then there would be no temptation.  Think of the Pitcher plant.  It has sweet nectar that attracts the insect; the best way for the insect to prevent drowning in the nectar is to avoid it.