One Sunday morning, a pastor observed a young little girl standing outside her Sunday school classroom; she was holding a storybook called, “Jonah and the Whale.” The pastor was feeling mischievous, so he asked her,

“What do you have in your hand?”
The girl answered, “This is my book about Jonah and the whale.”
“Now tell me something, do you believe that story?”
The girl answered, “Why of course I believe it!”
“You really believe a man can be swallowed up by a big whale, live in its stomach for a couple of days and come out okay?”
She said, “Yes. The story is in the Bible and we talked about it in Sunday School.”
“Can you prove to me this story is true?”
She thought for a moment and said, “When I get to heaven, I’ll ask Jonah.”
“What if Jonah’s not in heaven?”
The girl put her hands on her hips and sternly declared, “Then you can ask him.”

Today’s text talks about two disciples who were disappointed or discouraged about the death of Jesus. However it is a story of how they got their faith back; it can be our story as well.
My text is Luke 24:13-35.
Now on that same day two of them were going to a village called Emmaus, about seven miles from Jerusalem, 14 and talking with each other about all these things that had happened. 15While they were talking and discussing, Jesus himself came near and went with them, 16but their eyes were kept from recognizing him. 17And he said to them, “What are you discussing with each other while you walk along?” They stood still, looking sad. 18Then one of them, whose name was Cleopas, answered him, “Are you the only stranger in Jerusalem who does not know the things that have taken place there in these days?” 19He asked them, “What things?” They replied, “The things about Jesus of Nazareth, who was a prophet mighty in deed and word before God and all the people, 20and how our chief priests and leaders handed him over to be condemned to death and crucified him. 21But we had hoped that he was the one to redeem Israel.  Yes, and besides all this, it is now the third day since these things took place. 22Moreover, some women of our group astounded us. They were at the tomb early this morning, 23and when they did not find his body there, they came back and told us that they had indeed seen a vision of angels who said that he was alive. 24Some of those who were with us went to the tomb and found it just as the women had said; but they did not see him.” 25Then he said to them, “Oh, how foolish you are, and how slow of heart to believe all that the prophets have declared! 26Was it not necessary that the Messiah should suffer these things and then enter into his glory?” 27Then beginning with Moses and all the prophets, he interpreted to them the things about himself in all the scriptures.

28As they came near the village to which they were going, he walked ahead as if he were going on. 29But they urged him strongly, saying, “Stay with us, because it is almost evening and the day is now nearly over.” So he went in to stay with them. 30When he was at the table with them, he took bread, blessed and broke it, and gave it to them. 31Then their eyes were opened, and they recognized him; and he vanished from their sight. 32They said to each other, “Were not our hearts burning within us while he was talking to us on the road, while he was opening the scriptures to us?” 33That same hour they got up and returned to Jerusalem; and they found the eleven and their companions gathered together. 34They were saying, “The Lord has risen indeed, and he has appeared to Simon!” 35Then they told what had happened on the road, and how he had been made known to them in the breaking of the bread.
This is the Word of God. Thanks be to God.

Prior to Jesus’ death on the cross two disciples of the Lord, Cleophas and Simon, had looked forward to the inauguration of Christ’s messianic kingdom, where Jesus would rule and reign and usher in a period of peace.

In less a week, all hope was gone. All of Christ’s followers were scattered; the idea of a messianic kingdom was gone as well.  In the midst of this uncertainty, these two disciples decided it was time to go home.  As they walked the seven miles to their home in Emmaus, they were soon joined by a third person.  In the two or three hours they spent together, this veiled stranger opened up to them a new understanding of who the Messiah was and how God’s kingdom was to come about.  Slowly this new understanding gave way to hope and belief.

For many believers, faith isn’t instantaneous; it takes a while before the light bulb comes on. There comes a period of searching and reflection before that moment turns into faith.  The first verse of Amazing Grace speaks to that, “was blind, but now I see.”

Many bibles and Sunday school materials contain a painting of Jesus called “Christ knocking at the Door”.  It is a picture of our Lord wearing a white tunic, knocking on the door.  Notice, there is no outside handle to the door.  In order for the door to open, the person on the inside needs to initiate it.  The message of the painting is this.  Jesus is knocking on the door of our hearts and will not come in unless invited.

That was pretty much the situation in the Emmaus story. It appears Jesus was going to continue his journey until the two disciples urged Him to stay with them.  And it is this type of invitation that our Lord will honor.  Once they got inside Jesus, the honored rabbi, was asked to offer a blessing over the food.  Perhaps it was the way he broke the bread, the angle of the light on his uplifted face, or a glimpse of the nail pints in his hands, but that was when they became aware of who he really was.

Through the Emmaus story, we learn that the gift of faith can work through a combination of things, such as the examination of scriptures, the breaking of bread, and meeting and having conversation with other believers. In our church, you can find your faith through the entire worship experience.  We have all kinds of music, the written and spoken word, different types of prayers, and of course the conversations with each other over coffee and refreshment that can bring about a measure of faith.

The two disciples returning home to Emmaus did not expect to see Jesus, but it took that special moment to awaken their faith. Sometimes it takes other types of experiences for us to have our eyes opened.

In Methodist circles, there is an organization called the “Walk to Emmaus;” it is a weekend spiritual renewal experience based on this passage of scripture. I first learned about the Walk to Emmaus experience early on in my first pastorate; it was strongly encouraged for pastor’s to go and experience Emmaus for themselves.  During those 72 hours we learned, relearned, or reviewed the basics of our Christian faith.  We experienced the Lord in a personal way, just as the two early disciples had done.  It was fun, interactive, and time went by quickly.

Everyone participating in Emmaus reacted differently. Some began the weekend with no faith, others had more, but in the end there was a gradual transformation where everyone’s spiritual eyes were opened.  The “Walk to Emmaus” weekend changed the lives of many in my congregation; their faith was renewed, restored, strengthened and healed.

Sometimes people need a structured weekend totally devoted to God. The important thing is not how you found the Lord or where, but that you have him in your heart.

Let me close. The walk to Emmaus story was about how two disciples encountered Christ along life’s journey.  It is the same with us today.  Our Lord enters our lives by invitation.  Jesus will not violate our personal freedom nor will he knock down the resistant door of our lives.  If we want Him, he will respond to the invitation.

So is Jesus an acquaintance or an intimate friend? Have you allowed Him in your heart?  Is Christ knocking at the door of your heart, if so, would you open it up? 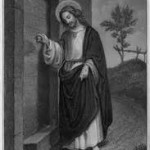