In her book The Hiding Place, Corrie Ten Boom told of an incident that taught her to always be thankful to God.  It was during the Second World War where she and her sister, Betsy, were prisoners at the Ravensbruck concentration camp.  When the two sisters arrived, the female barracks was greatly overcrowded and filled with fleas.  Prior to their arrival, Betsy had just read in her small pocket Bible, 1 Thessalonians 5:18 which reminded her to “rejoice always, pray constantly, and give thanks in all circumstances.” When the two sisters saw the appalling conditions, they were depressed, but Betsy insisted they needed to thank God for their new living quarters.  Corrie refused, but finally gave in.  As the months passed, the two sisters were surprised to find how openly they could hold Bible studies and prayer meetings without guard interference.  Later they learned the true reason: the guards would not enter the barracks because of the fleas.

My text for this morning is Psalm 100. It is a psalm that the Pilgrims knew quite well and it gave them strength in all that they had to endure, both on the Mayflower and on Plymouth Plantation.
Make a joyful noise to the Lord, all the earth. Worship the Lord with gladness; come into his presence with singing. Know that the Lord is God. It is he that made us, and we are his; we are his people, and the sheep of his pasture. Enter his gates with thanksgiving, and his courts with praise. Give thanks to him, bless his name.  For the Lord is good; his steadfast love endures forever, and his faithfulness to all generations.
This is the Word of God.

The 100th Psalm was written for the Jewish pilgrims who came into Jerusalem to worship.  Now the writer of Psalms didn’t give them a list to be thankful such as:

But instead the psalmist encouraged believers to “Give thanks to Him and praise his name.” When you think about it, our focus of worship should be on God and not just on what He gives, because things such as food, shelter, health, relationships, job, car or income can change at a moment’s notice.

As chaplain of the Fire Department, I can see this almost on a daily basis. When my beeper goes off, it is always a cry for help whether it is a fire, an accident or some medical problem.  You see, buildings or physical structures can be destroyed by fire, cars can be damaged in accidents, or people can have medical situations that need immediate attention.  When we wake up we don’t know what each day may bring; unfortunately for some, there will be an emergency.  I often witness the first responders, fighters and ambulance personnel, who put things in perspective when they say, “You are okay, you are alive.  You can always replace material things, but you have your family and your health and that is what is important.”

For believers in the Lord, we are reminded there is one constant: our relationship with our Heavenly Father. The Pilgrims were the ones who started the custom of Thanksgiving, even though they lived in times of great adversity. 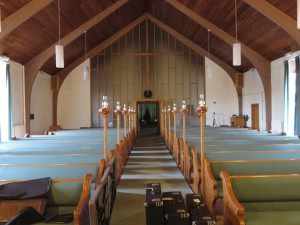 Let me put this in perspective. Let’s pretend we are about to convert ¾ of our sanctuary into a cargo ship where all of you are about to be passengers and for the next 66 days.  You would not be able to leave, and your first day of freedom will be January 30, 2017.  Let me add we would turn down the heat and shut off all the lights. Many of you will become sick with colds and the flu.  The only clothes that you would have would be what you are wearing. And don’t let me forgot, the trustees will make arrangements to have one port-a-potty placed in the corner.  These are just some of the difficult conditions that would send us over the edge.

The Pilgrims kept their sanity through their faith in God. Every day they read from the Bible, they sang praises to God, and they prayed; this was their source of strength.  That spiritual activity on the ship was what kept their minds off their misery and on to the Lord. What worked for them will work for us.

This past week, I just finished a book on tape called Captain’s Duty.  It was about merchant marine captain, Richard Phillips, and how he was captured by Somali pirates and held captive for 5 days where he endured all kinds of physical and emotional abuse.  But there was one thing that kept him going.  It was a phrase that he learned in his church in Vermont and he kept repeating it.  “God is good, all the time. God is good”.  His prayers were answered and he was rescued him.

I have some inspirational quotes:

Today, we will sing “Now Thank We All Our God”.  It was written by a German pastor named Martin Rinckart during a very difficult time called the Thirty Years War.  During that time, thousands of refugees moved into the tiny village where Rinckart lived.  In time, the overcrowded conditions of the city brought on famine, disease, and death.  It those difficult days, Pastor Rinckart conducted hundreds of funerals, including his wife’s.  He lost all of his property, and he was desperate to find food for his children.  Yet he was able to write this song.
Now thank we all our God, with heart and hands and voices, who wondrous things has done, in whom this world rejoices;

How could he write of such gratitude? He took his eyes off his trials, adversity, problems, and death and on to the Lord.

May God help us to thank and praise God despite any difficult circumstances we are facing.

Let me close. The Pilgrims had an interesting custom.  When they sat down for their Thanksgiving Day feast, they would place five kernels of corn on each plate.  It was a reminder that the five kernels of corn were rationed out during the worst of the winter and God brought them through it.