When St. Patrick ministered to the people of Ireland so long ago, he used the common things of everyday life to explain the Christian faith.  And if he were with us today, I believe he would use the same methods to teach us about God.

My sermon topic for this morning is this:  What would St. Patrick Say or WWSPS?  Let’s start with a special text known as “St. Patrick’s breastplate”.  This is the shorter version:

May God add a special blessing upon the words of St. Patrick.

In 387 AD, a boy named Maewyn Sucat was born to aristocratic parents in the country of England.  When the baby was brought to the church to be christened, he was named Patrick and that was what he was called the rest of his life.

As a youth, Patrick lived the privileged life of nobility and his future was filled with promise.  However, in terms of his spiritual life, the things of God just didn’t have any importance, nor were they any concern of his.

Patrick’s life took a dramatic turn, just before his 16th birthday when he was kidnapped by pirates and taken to Ireland.  His parents had no idea of what happened; when he did not return after many days, they presumed he was dead.  But Patrick was very much alive; he worked for the next six years as a slave who tended sheep for an abusive and cruel master.  Trapped in a foreign land, discouraged and depressed, Patrick had nowhere to turn, except to the Lord.

In his autobiography, Patrick told how God had opened his spiritual eyes.  With this new found faith, he said, “I used to stay out in the forests and on the mountains and wake up before day light to pray in the snow, in the icy coldness, in the rain.  I used to feel neither ill nor any slothfulness, because as I now see, the Spirit was burning in me at the time.”

Though Patrick didn’t know it, the Lord was preparing him to be shepherd of his people.

In his 6th year of captivity, Patrick had a dream and a heavenly messenger told him that he would soon go home.  In response to that dream, Patrick ran away, managed to get aboard a ship and returned to England.  When he showed up at his parent’s home, his mother and father were astonished that he was still alive and even more surprised to find out that he intended to go back and preach the gospel to those who once enslaved him.

In order to fulfill God’s plan for his life, he needed to be trained and after a lengthy period of seminary and local parish ministry, Patrick was ready.  Now 40 years of age, he stepped ashore the Emerald isle, not as a kidnapped slave, but as bishop of the church.

In the next 30 years, Patrick took the gospel to places where no one had gone and because of his dedication to God, the Irish people heard the gospel and they responded.

Patrick taught the people about God through the shamrock.  It was a wild plant that grew everywhere.  Just as the three separate leaves formed the one plant, Patrick taught there is one God in three persons.

Now if Patrick were with us today, he might teach us about the trinity by using an Easter lily.

Patrick might even use me as an illustration to explain how the Trinity works.

I am one person, yet I have three separate identities:

The first sketch would be a triangle to show the three equal sides which form one complete whole.

He might draw some Borromean Rings to illustrate the eternal nature of the trinity.  The three overlapping or intertwined circles would represent the three persons in the Godhead.  Thus we would have the equality, unity and eternity of the trinity.  Circles, having no beginning or end, represent God as eternal.  The circles so arranged emphasize the interdependence and indissolubility of the Trinity. 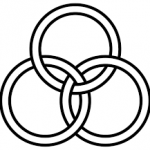 With regards to the Godhead, they are all one.  Their glory is equal, their majesty is co-eternal.  Each one has participated part and parcel of what the others did.  There is an eternal undivided fellowship while each is separate, while all are one.

If Patrick were here, I think he would have used the shamrock, the Easter lily, me, water, the triangle and the Borromean rings to teach us about God.

And he would be the first to tell us that it is not enough to believe in our heads that God exists, but he must live in our hearts.

This question was once asked of me; I suspect that when Patrick was in Ireland trying to win people to the Lord, he might have heard something similar.  Let me pose the question to you:

What does your relationship with God do for you?

How would you answer that?  The first time I tried to answer this, I was tongue tied.  After much reflection, I was able to come up with an answer.  Perhaps Patrick answered in a similar fashion:

That is all a part of why I believe in God.  What made Patrick great was that he had a dynamic relationship with God; I think he would have answered in a similar way.

Let me close.  Most of the world celebrates St. Patrick’s Day through parties and revelry, but the man was serious and sober and had a passion for the things of God.  May we be like Patrick of old and use the common things of this life to understand God and to explain God to others.  May we be as dedicated as Patrick was in living out and sharing our faith.