At the end of WWII when most of London was in ruins, there was an American soldier who was in his jeep on the way back to the barracks, when he spotted a homeless boy.  What was unusual about this particular scene was that he had his nose pressed against the window of a pastry shop.  When the soldier saw this, he pulled his jeep to the curb.  Got out and walked to where the boy stood.  And then he understood.  What he could see through the window were newly baked doughnuts being pulled out of the oven.  So he asked the hungry boy, “Son, would you like some of those?”  The boy was startled and said “Oh yes-I would!”  He stepped inside, bought a dozen, put the donuts in a bag and said to the boy, “Here you are.”  As he turned to walk away, he felt a tug on his army fatigue jacket coat; the boy asked, “Mister, are you God?”

When we give, we do something for God; it is a great measuring stick of our commitment to the Lord and to the needs of others.  In some cases it is also an expression of worship.

My scripture text is Mark 12:38-44 and it is about a widow who was singled out by Jesus for her contribution.

As he taught, Jesus said, “Watch out for the teachers of the law. They like to walk around in flowing robes and be greeted with respect in the marketplaces, 39 and have the most important seats in the synagogues and the places of honor at banquets. 40 They devour widows’ houses and for a show make lengthy prayers. These men will be punished most severely.”41 Jesus sat down opposite the place where the offerings were put and watched the crowd putting their money into the temple treasury. Many rich people threw in large amounts. 42 But a poor widow came and put in two very small copper coins, worth only a few cents.43 Calling his disciples to him, Jesus said, “Truly I tell you, this poor widow has put more into the treasury than all the others. 44 They all gave out of their wealth; but she, out of her poverty, put in everything—all she had to live on.”

It was here at this particular time, we find Jesus in the temple.  And after a full day where he taught and answered questions, he sat down on a bench in what was known as the Court of the Women.

But it was in the Court of the Women where this story takes place.  This place was a bit unusual in the fact that there were 12 wooden chests located near the 4 entrances.  These chests were called “trumpets” because on top of the lid there was a bell shaped horn; this was where the money would be deposited.  In the graphic you can see the bell. 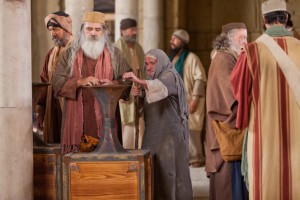 So on this one particular day, an elderly woman had come into the Court.  As a widow, her life had been difficult, but more so if she had no adult child to care for her.  In my mind’s eye, I can sort of picture her like the woman in the graphic.  Even though there were people around her, she was pretty much ignored as she put in 2 small coins.

But the poor widow did impress the one who counted the most.

This widow had no idea that she was watched and I find it even more interesting that Jesus talked about her, but never actually spoke to her.  He just let her go her way.

If I could give you a hypothetical situation, let’s pretend there was a compassionate, wealthy merchant who was also in the Court of the Women, the same time the widow was there.  Suppose he said, “Lady stop.  What are you doing?  Save your money.  Buy some bread or some milk.  Spend your money on things you need.  Don’t worry, the temple will more than survive without it.  Here, I’ll make the contribution for you.”  I don’t think she would take up his offer.  Yet in the eyes of God, what this woman did what was right.  Her offering was sacred money and she was commended for it.

Now on a more humorous note, when my father in law was alive, he would often talk to me about what the priest had to say during mass and there was one subject that aggravated him more than any other.  Can you guess what it was?…And to prove his point, he would show me the church bulletin or the newsletter with its pie charts, graphs, formulas, and calculations all designed to motivate the parishioners to give more.  At the time, I thought it was kind of interesting and made me chuckle, because I know a lot of people like my late father in law who wished the subject would never come up.

What has helped me in my understanding of stewardship is that I needed to go back in history to the very beginning of Genesis, where worship was simply an animal sacrifice, a presentation of a gift, and a prayer of thanks.  As time went on, more components were added.

As pastor of this church, I am involved in many aspects of the Sunday morning worship service, but there is one part where I feel like an Old Testament priest of God and that is when I take the gifts of food and place them on top of the altar and hold the offering plates and face the cross.  To me that is a sacred moment where I truly represent you.

There is a story that I feel reflects the spirit of how we are to give.  Once there was a knock on the door of the hut occupied by a missionary in Africa.  When the missionary answered the door, he found one of the native boys holding a large fish in his hand.  The boy said, “Reverend, you taught us what tithing (or 10%) is, so here-I brought you my tithe.”  As the missionary gratefully took the fish, he said to the young lad “If this is the tithe, where are the other nine fish?”  The boy beamed and said, “Oh they’re still back in the river.  I’m going back to catch them now.”

I love the boy’s attitude.  In his life, God was truly first-not last.  With that type of faith, he probably caught more than nine fish.  It wouldn’t have surprised me if he caught 18.  And I hope all of us will have the same trust as that African boy.  Not to think of the bare minimum or the least amount that is acceptable.

I realize there are multitude of books, seminars, workshops that denominational leaders encourage ministers to read or attend in hopes that it will improve a church’s finances.  What I found is that some of the plans work and others do not.

Now there is something to be said about worship or giving in its simplest form: laying your gift upon the altar.  In early church history, people did just that, and it was called the Offertory Procession.

As a military chaplain, I had the opportunity to pastor of a black congregation for 18 months.  It was called the Fort Clayton Gospel located on an American military base near the Panama Canal.  When the liturgist announced it was time for the offering, the people clapped and cheered.  It was amazing.  The choir stood and began to sing while the people came down the center aisle and put their gifts in the offering plate.  Those who had nothing to give came anyway.  Then there were others who prayed at the altar rail and rededicated their lives to the Lord.  It gave me a new perspective on giving.

All churches have their own traditions in worship and we have ours at Rockville.  So whether we give on line, have direct withdrawal mail in our check, place the envelope in the offering plate, it is a sacred moment, because it denotes trust because it truly defines our relationship with God.  Let me give you a radical thought.  The next time you decide what to give, do not think in dollars and cents, but think in percentages.

When the poor widow gave, she trusted in God and gave out of her need, far more than what was required.  The soldier who gave those 12 donuts did it out of the goodness of his heart.  The African boy who gave the fish knew the Lord would more than meet his needs.