Hall of Fame Tennis Player, Jean Rene Lacoste dominated the sport in the late 1920’s and was known in his career as “Le Crocodile” because of his tenacious play on the tennis court.  He liked his nickname so much that he had a tiny crocodile embroidered on his sports jacket.  Then in his retirement, he added the logo to a line of shirts that he designed, the symbol caught on.  Now while millions today, around the world wears what we call “alligator” shirts, the logo has deeper significance when they know the meaning behind it.

Like the alligator or crocodile the cross is the symbol of Christianity and it holds special meaning for Christ’s disciples, because it is more than just a religious identification, but is a way of life for us.

Then he began to teach them that the Son of Man must undergo great suffering, and be rejected by the elders, the chief priests, and the scribes, and be killed, and after three days rise again. 32 He said all this quite openly. And Peter took him aside and began to rebuke him. 33 But turning and looking at his disciples, he rebuked Peter and said, “Get behind me, Satan! For you are setting your mind not on divine things but on human things.”

34 He called the crowd with his disciples, and said to them, “If any want to become my followers, let them deny themselves and take up their cross and follow me. 35 For those who want to save their life will lose it, and those who lose their life for my sake, and for the sake of the gospel,[a] will save it. 36 For what will it profit them to gain the whole world and forfeit their life? 37 Indeed, what can they give in return for their life? 38 Those who are ashamed of me and of my words[b] in this adulterous and sinful generation, of them the Son of Man will also be ashamed when he comes in the glory of his Father with the holy angels.”
This is the gospel of the Lord.  Thanks be to God.

In Biblical times, the cross was a well-known method of capital punishment.  In fact, when Jesus told his followers “to take up their cross” he meant it as a sign of Christian discipleship.  It’s almost like we lose our life for something better.  Or we choose the intangible over the tangible, the spiritual over the physical or the invisible over the visible.

When we take up our cross, it does not necessarily mean that we put on a wooden, silver or golden cross around our neck to show what religious faith we belong to, although that is part of it.  But we share in Christ’s birth, his life, his teachings, his death and resurrection.  In other words, when we take up the cross, we put Christ first in all things and if we have to suffer for his name, then we do it.

Now there is an example of those who literally denied themselves, took up their cross in the service for their Lord and they were four Army Chaplains.  Their names were Rev. George Fox a Methodist minister, Rabbi Alexander Good of the Jewish faith, Father John Washington, a Roman Catholic priest and Rev. Clark Poling, a Dutch Reformed minister.

There was an event that took place in February of 1943, when the USS Dorchester loaded with 902 service members was struck by an enemy torpedo.  Immediately there was panic and chaos, but it was the four Army chaplains who brought hope to the soldiers.  In the 18 minutes before the ship had sunk, these chaplains performed last rites and handed out life jackets.  But when four frightened soldiers had showed up without lifejackets, the four chaplains gave them theirs.  Witnesses reported that just before the ship had finally sunk, the four chaplains were seen as they stood arm in arm in the attitude of prayer.  To me that was a clear cut example of how they denied themselves and I believe if these chaplains had a chance to do it again, they would.

Several years ago, there was a rubber bracelet that seemed to be the in thing of Christian Discipleship and it was the WWJD or What would Jesus do?  It is still around, but not as common as it was.  The message is simple, every decision we make should be done in light of WWJD.  You see, cross bearing is not an easy road.  And if truth be known, it is the least traveled one.

The cross of discipleship can be difficult.  For me, there are times I would rather have the freedom to do my own thing, in my own time and my own way.  But I know I would not be happy.  I have tried to have a little bit of the world and give Christ the rest.  But I have learned that type of Christian faith doesn’t work.  It is a total commitment.  It is all or nothing.

Now don’t get me wrong, it does take sacrifice and discipline, to have a quiet time with God.  To come to the house of the Lord when there is snow on the ground or when the weather is absolutely spectacular.  There is a well-known hymn that speaks to this and we know the refrain.  “Trust and Obey for there is no other way to be happy in Jesus is to Trust and Obey.”

I believe it was in the spirit of discipleship that enabled Glen Plashin to earn his college degree.   In his book, Turning Point, he wrote about the time he was a senior in college during the time of the Great Depression.  That was when money was tight and his family could not secure any loans to pay for Glen’s college tuition even though it was a mere $20.  But the day before college was to begin, a big truck backed up into their driveway and two men got out and laid down some boards.  There was one thing that Glenn’s mother loved more than anything else and that was her wooden upright Gulbranson piano.  What the two men did was roll the piano out of the house and onto the truck and handed the mother thirty-five dollars.  As the truck drove away, his father threw his arms around his mother as she cried and cried.  His father handed him the money and said, “Son, you can go back to college tomorrow.”  Your mother sold her piano.  When Glenn received the money, he had only one thought.  So this is what God’s love is like when he gave his most precious possession, His son.  Though Glenn’s mom also made a sacrifice though it was on a much smaller scale, he made the connection.

On a more serious and somber note, this past year, we have seen on the news, how ISIS has enslaved, killed, and uprooted Christians in parts of Iraq and Syria.  Many of these Christians have refused to renounce their faith and lost their lives and homes for the sake of the gospel.  For these Middle Eastern Christians, these words of Jesus are not symbolic, but a living reality.

We need to remember these Christians in our prayers, and perhaps we should follow the example of the Vatican in Rome.  I have learned this week under the leadership of Pope Francis that several refugee families have been housed in the papal apartments.  And if any Christian refugees should find their way into the Vernon/Manchester area, we should do what we can with other churches to help them get settled.

There is an image that can be found on the internet.  On the top part it says, “Anybody can wear one” and the bottom shows a man carrying a life sized cross which says, “But can you bear one?”  That is the essence of what Jesus taught, and it is the reality of our faith. 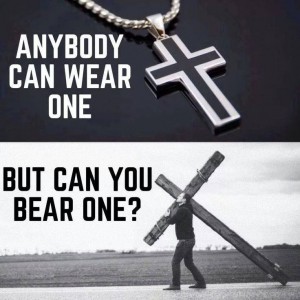 May we be the type of Christian who puts Jesus first and have the courage to suffer for his name.